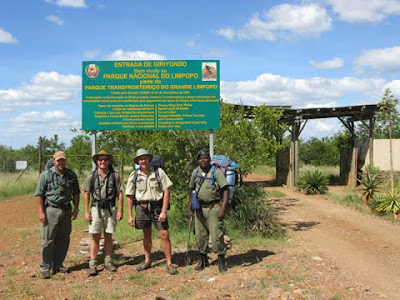 Good to go!
At the Giriyondo border post with our PNL Ranger Manulito. 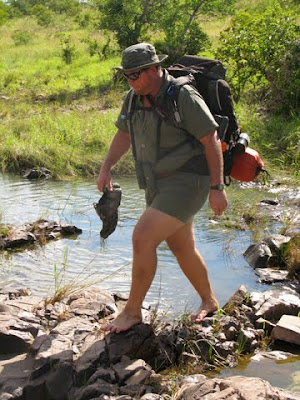 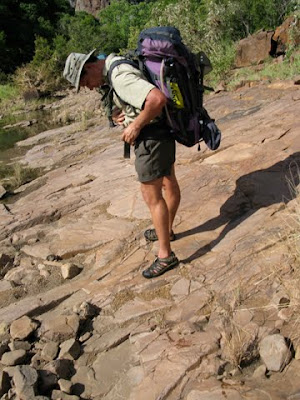 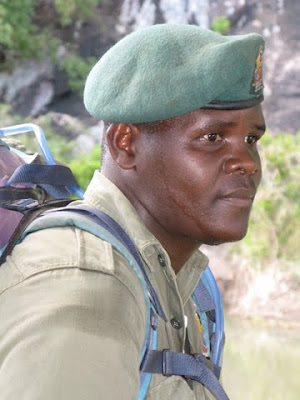 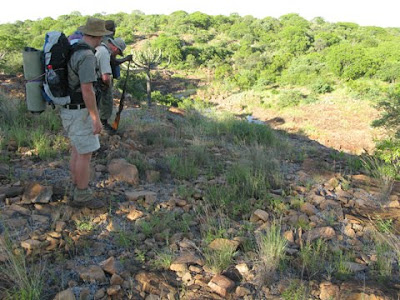 Trying to find the first nights waypoint. We seemed to be close but no cigar! Ended up sleeping in a very damp, mosquito ridden path next to a stream. Not ideal but we enjoyed it. 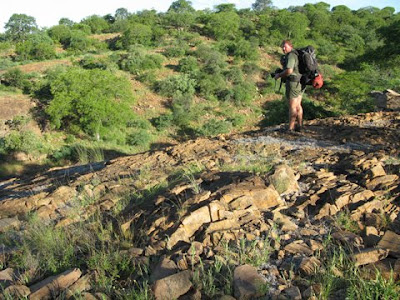 Marius about to say something about the geology. Nothing I can repeat here! 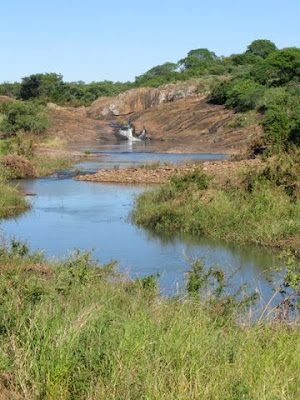 With all the rain the streams were in full spuite and we had wonderful drinking water. 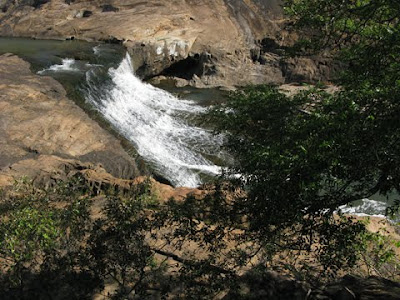 One of the waterfalls we passed. 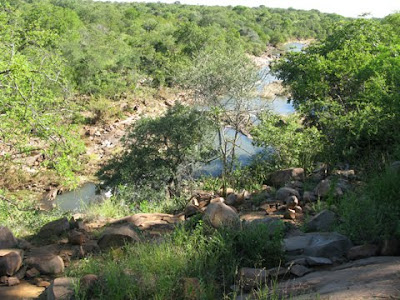 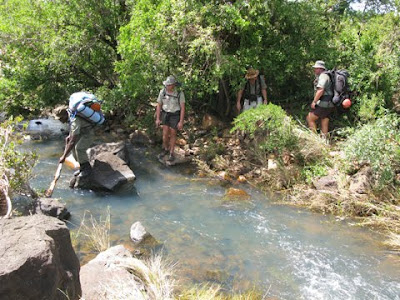 Constantly crossing streams, as we tried to find a suitable route. 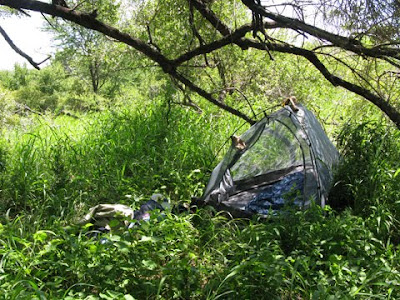 My tent on the second night. Very cool and comfortable spot, with great swimming in the stream below. 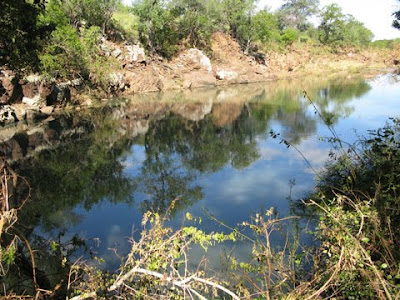 We found a poachers camp right here on the bank of this beautiful section of river. The sign was about two days old! So not a lot we could do about it. We also saw their tracks on the first day very close to the Kruger boundry. No doubt after S.A.'s rhino !! 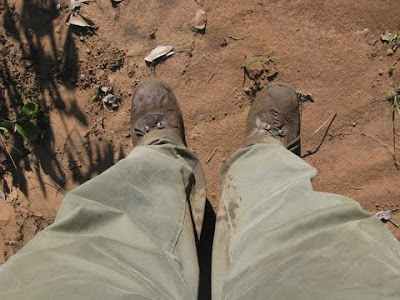 I had to have a picture of me wearing these Hi Tec boots. I normally walk in takkies but for some reason decided to wear boots. It proved to be a wise choice with all the loose rock. I must say these are the lightest boots I have ever owned. 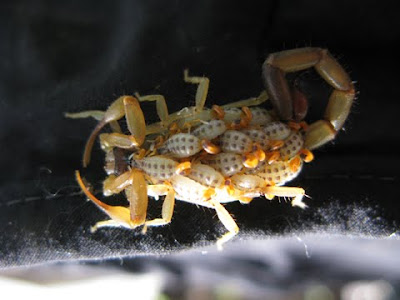 This little package was waiting for Marius in his shorts! Could have been a very nasty surprise for both parties! 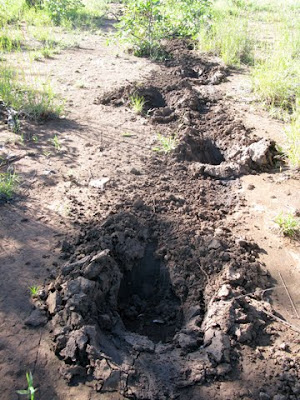 Some elephant tracks. This guy just stuck to the path even if he sank in up to his knees! You can just imagine a dinosaur doing the same thing millions of years ago. 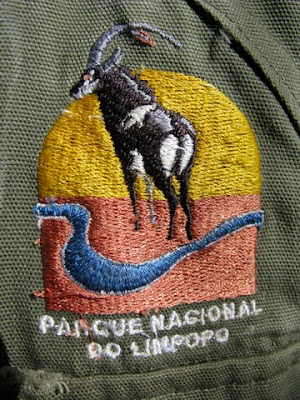 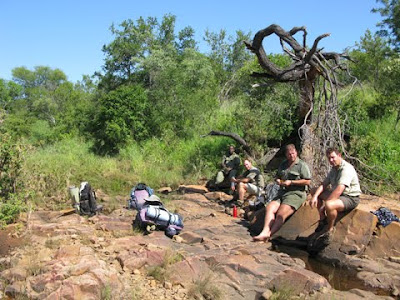 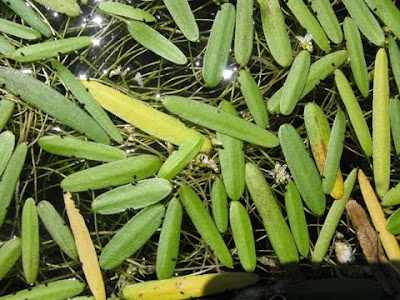 An amazing plant growing in all the water filled rock pools on the rhyolite koptjies. 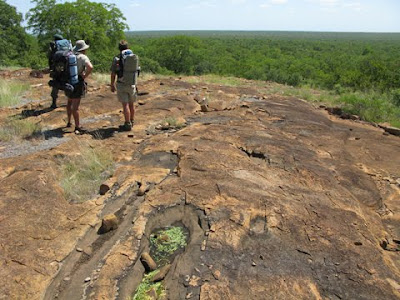 Looking east towards the Shingwedzi River flowing into Mozambique. 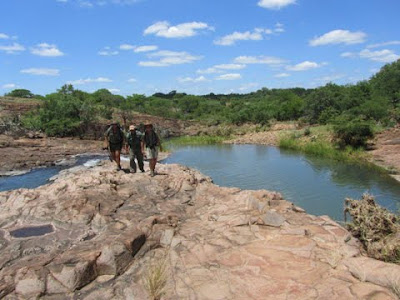 My favorite stop on the whole walk. Even with the two large crocs in the pool below. We managed to have a swim in the stream as it dropped over the rocks into the pool below. Luckily there was no space for crocs. 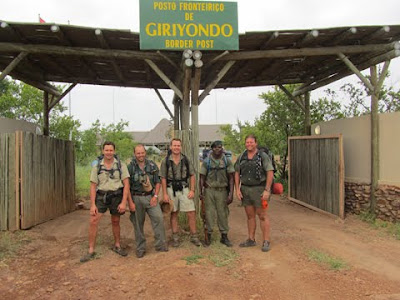 Weary but satisfied.
Posted by Sean Pattrick at 2:49 PM No comments: