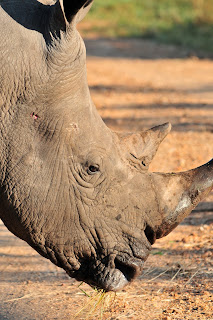 I had an e mail today for someone wanting to do something about the poaching that is so rampant in South Africa. Their concern was that it would be too little to late? How do you answer that or even begin to explain why we sit in this situation.

We all know that there is a huge demand from various parts of the East for rhino horn, ivory, lion bones, and so the list goes on. Part of the reason is traditional medicine, dagger handles, and more recently people trying to show their status and wealth.
In recent years the Chinese have become very involved in Africa, more so that in the past just suppling arms. They are now involved in building infrastructure in exchange for who knows what? There are various theories/stories of Chinese labour being used for these projects and then having to stay in the host country. There are the same stories of arms for ivory, rhino horn, diamonds etc

We have recently signed a agreement with China for more economic co operation and trade. Why are we not asking for sanctions against all the countries that are responsible for murdering our natural heritage? We are experiencing animal abuse on a scale only seen 200 years ago with the eradication of the great herds of buffalo. Why are we not putting more pressure internationally on these countries. We were all for sanctions against apartheid? People of the world stop seeing these acts in isolation! It is happening globally and it affects us all. It leaves our systems, our life blood in a poorer state.

In African countries were there is often so much corruption due to nepotism or affirmative action. You have incompetent people in positions of power that make decisions for their own good. They employ unqualified people so they will always look good and can not be easily caught out. They employ people in the same political party or with family links. This leads to a ill disciplined police force, an unmotivated army and a general disregard for the countries laws! Hence the disbanding of the Endangered Species protection Unit in the police and the removal of the Scorpions.  Once the system gets to this stage it is very easy for criminal elements to take advantage of such people.

We could even extrapolate and say that some ruling parties would rather have an uneducated population so as to stay in power and not be questioned. That same party could also benefit by being the power house in a region by keeping their neighbours countries unstable. Those unstable or economically poor countries might easily revert to civil war to try and change their political systems. hence RENAMO's threats of going back to the bush. Were do guerilla armies get money for arms? The easy solution is wildlife. The old smuggling routes established in the 80's by the guerilla's and the South Africans may not be there but it is easier now. With Eastern diplomats in most Southern African cities, the diplomatic pouch is open for business!

So the real reason we are in the situation we are, has more to do with economics than with anything else. As I see it.

Posted by Sean Pattrick at 2:02 PM No comments: